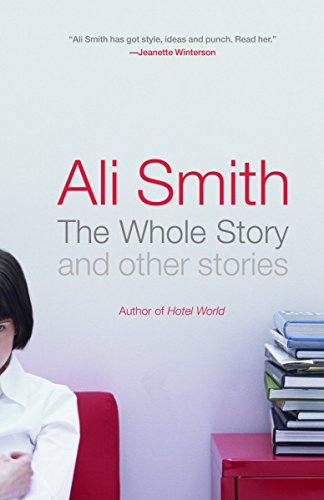 THE WHOLE STORY: And Other Stories

Switching back to short fiction after a highly successful debut novel ( ), Smith crafts 12 sharp, unsettling stories tuned to a frequency just beyond the range of reality. The collection begins with "The Universal Story," about a man who buys up used copies of for his sister; she plans to use them to build a paper boat. Engaging as it is in itself, this narrative is just the pretext for a meditation on the nature of storytelling, which Smith undertakes by shifting her focus to marginal characters and then to a meandering fly. Other, similarly inventive and whimsical conceits dominate the collection. In "May," for instance, a woman falls in love with a tree on a neighbor's property that literally becomes a rival for her husband's affection, while in "Gothic," a bookstore clerk has to deal with a series of odd and occasionally threatening customers. A frequent preoccupation is the way art and literature work on the imagination. Smith pokes cheeky fun at contemporary art in "The Shortlist Season," in which the protagonist visits a gallery and has a curiously physical reaction to what she sees ("Perhaps, I thought to myself, I could have tests for art intolerance, like patch tests"). Some of the conceits are rather airy, but the combination of Smith's startlingly inventive story lines and her ability to get into the hearts and heads of her often squirrelly characters makes her tales oddly affecting. Smith forces readers to examine their assumptions, particularly as readers and consumers of their own fictions.