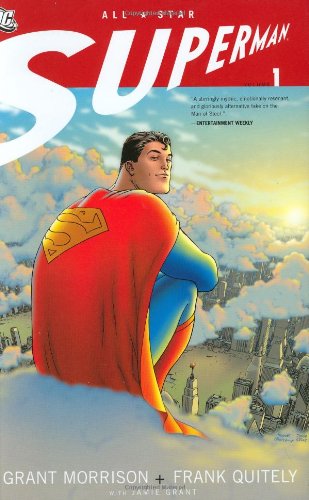 Morrison's superb Superman stories can be poignant, action-packed or downright silly, often in the same tale. An expedition to the heart of the sun is sabotaged by Lex Luthor, who would stand to profit from a global water shortage. Superman saves the day, but at a steep cost—his encounter with the sun alters him at a cellular level, and it looks like the Man of Steel actually faces death. The big story deals with Luthor's fervent quest to outlive his enemy, even as he himself sits on death row. The episodic tales along the way are the real delight, though: Superman reveals his true identity to Lois, but she doesn't believe him; for her birthday he gives her a potion which makes her a superwoman for 24 hours; Jimmy Olson becomes "eccentric zillionaire daredevil" for a day for a newspaper column; and in the best of the tales, Clark visits Luthor in prison for an exclusive interview, only to have an undesirable effect on a monstrous inmate. Quitely's art is wide-eyed and simple, yet still cosmically epic, drenched in an old-school color palette that makes this a vibrant feast for the eyes.