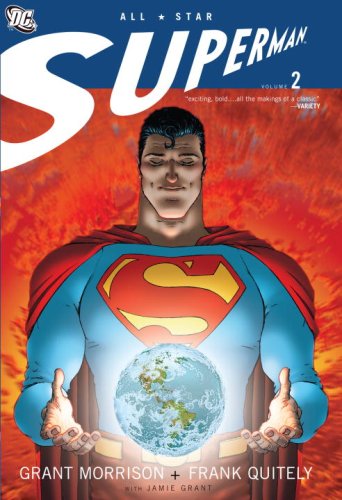 Morrison, Quitely and Grant conclude their fresh and compelling take on the most iconic superhero in comics. Recently, grittier modern-day reinterpretations of classic characters, set outside normal continuity, have become the popular way to do a limited series such as this one. Morrison’s Superman, however, is the same defender of truth, justice and the American way recognizable to generations of comics readers. Now, however, his days are numbered. Slowly dying from overexposure to solar radiation, Superman is faced with the dilemma of how to do the most good in his final days and how to prepare the people and planet he loves to carry on without him. Morrison’s feverish style is both a blessing and a curse, as the overwhelming deluge of ideas thrown at the reader confuses even while creating a parallel with Superman’s own constant supersensory information overload. Yet Morrison’s writing recaptures the sense of simple wonder and virtue essential to a classic Superman tale. Quitely and Grant’s art is evocative of the earliest images of the character, a refined evolution of the bright costumes, skylines and chiseled jaws that adds a dignity and humanity to the characters beyond their cartoonish origins.