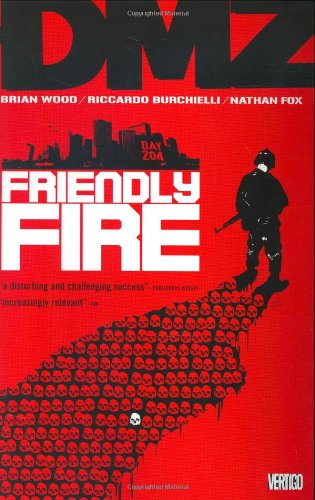 In the aftermath of a massive civilian slaughter by America’s own troops, journalist Matty Roth desperately searches for answers and accountability in this hauntingly grim but surprisingly poignant war story. The five-issue collection, continuing to expand upon the intriguing premise of a demilitarized Manhattan resulting from the civil war between the U.S. Government and Free State rebels, showcases numerous conflicting accounts of the infamous “Day 204 Massacre.” The story is eerily astute in its portrayal of the fog of war, particularly the unavoidably deadly consequences of poorly planned operations in an urban combat theater. Despite Matty’s and the reader’s genuine desire for justice, or even just some answers, the conclusion is smartly complex and anticlimactic, and therefore heartbreakingly believable. The writing and artwork, by regular artist Burchielli and a variety of guests, is well paired, the gritty images bringing to life a dark, lonely yet claustrophobic cityscape, where a pointless death is only an exploding building or angry mob away. The book expertly explores the intricacies of death and responsibility in combat, and the tragic nature of people who are forced to turn on their own.