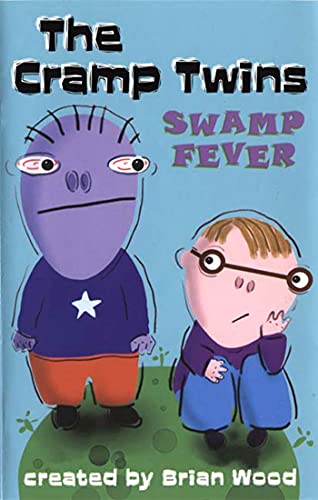 Kids will groan far more often than they chuckle at these inane illustrated novels, which launch the Cramp Twins series by British author Wood. Lucien and his renegade brother, Wayne, live in Soap City, whose largest employer is the Haz Chem soap factory. In this first tale, the constantly feuding twins prepare to attend the factory's annual country and western barbecue. Within the first 14 pages, Wayne tries to sell a dead dog to some young neighbors and Lucien attempts to send an e-mail to his best friend but discovers his sibling has built a high-voltage fence around the computer. So Lucien finishes off a "self-defence outfit" made out of rubberized wool (which "he'd been knitting for just such an occasion") and successfully protects himself when Wayne begins "battering Lucien with his hammer-like fists." Additional ludicrous, sometimes sick, off-color antics occur throughout this and the subsequent story, which centers on the boys' class project to clean up the town's swampland. Artwork that emulates a child's approach plus scrawled hand-lettering may seem familiar to fans of Captain Underpants, but there is no through story line to redeem the slapstick events. Ages 7-12. (.)