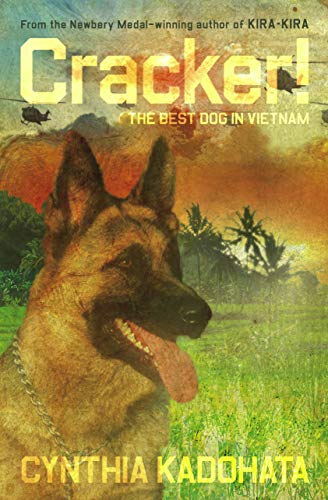 Cracker! The Best Dog in Vietnam

The author of and takes readers back to the Vietnam War era in this meticulously researched story about a special friendship that develops between an American soldier and a dog. When 17-year-old Rick Hanski enlists in the army, he intends to "whip the world," but he soon finds out that he can't do it alone. As a dog handler, he relies on Cracker, a sharp-minded German shepherd to protect him from danger and provide him with companionship during his tour of duty in Vietnam. The author builds tension when Rick and Cracker are sent on a mission to rescue two POWs, and again when they are taken by surprise in an ambush attack. Alternating human and canine points of view, Kadohata shows how Rick and Cracker come to trust and depend on each other during times of crisis. Rick's thoughts encapsulate the confusion and growing paranoia of soldiers living in a land where friends and foes are hardly distinguishable. Cracker's perspective represents more basic emotions, though some readers may be troubled by occasional anthropomorphization (e.g., "Cracker didn't think the dog was crazy. He was just protecting his handler. She kind of respected him"). Although the author remains politically neutral in telling her tale, she does acknowledge war protesters' attitudes and deftly conveys the way Rick's own feelings about the war change over time. Offering adventure mixed with stark realism, this novel will leave a lasting impression on readers. Ages 10-up.