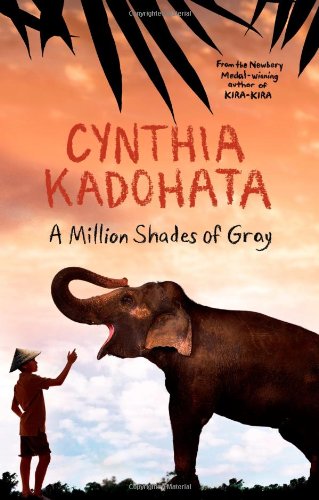 A Million Shades of Gray

Newbery Medalist Kadohata ( ) shows that truth has as many shades of gray as an elephant in this emotionally taut survival story, set in war-torn South Vietnam. After American troops leave his village, Y’Tin, his family, and his neighbors are left to fend off their enemies themselves. But Y’Tin’s mind isn’t on war. It’s on his pet elephant, Lady, and his dreams of opening an elephant-training school. His hopes vanish when North Vietnamese soldiers devastate his small village (Y’Tin helps dig a mass grave at one point). Y’Tin manages to escape into the jungle with a friend, where he reunites with Lady, but separated from family and friends, his thoughts grow dark. As the days go by, he becomes angrier and less trusting, wondering “if he would ever feel safe again or if safety was gone from his life forever.” Illustrating the wisdom of Y’Tin’s father’s words—“The jungle changes a man”—Kadohata delves deep into the soul of her protagonist while making a faraway place and the stark consequences of war seem very near. Y’Tin’s inner conflicts and changing perception of the world will haunt readers. Ages 10–up.