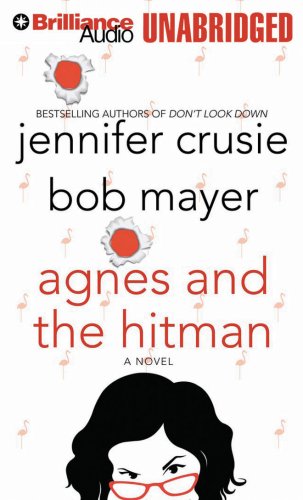 Agnes and the Hitman

Crusie and Mayer reteam (after ) on this goofball romantic confectionary that mixes together Cranky Agnes, a food writer and caterer, with Shane, a hit man with no last name. The plot is a little short on sense, but it's hard to complain when the duo keeps the ingredients coming at a fast pace. Agnes has staked everything she owns on the big Mafia wedding she's catering, and Shane has been sent to keep an eye on Agnes but winds up in love and in big trouble. Soon the two are involved in a dognapping and snooping in a basement hiding a murdered body and $5 million. Burr does a very good job as the women in the story (besides Agnes, there's also Brenda Fortunato, the widow of a top gangster who is hatching a dastardly plot to steal Agnes's treasured home). Unfortunately, Burr isn't as convincing with the male voices. Still, there's enough romance and comedy here to make it all diverting.