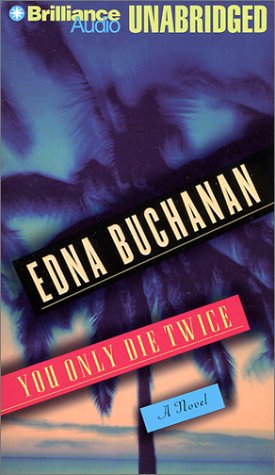 YOU ONLY DIE TWICE

Pulitzer Prize–winning journalist Buchanan has retained an impeccably high standard since turning to fiction with 1990's , and her eighth mystery featuring crime reporter Britt Montero is one of the best. Narrated with assurance by Brilliance veteran Burr, the audio production benefits from this mystery's unusually streamlined style. Typically, Britt's adventures feature abundant, fascinating mini-mysteries popping up on the job, diverting her attention from the main case. This time, the mystery is more tightly focused. Some may miss the extra color, but no one will find anything lacking in this riveting, complex and clever thriller. Britt's immediate task is to identify the nude, recently dead body of a beautiful woman that has washed ashore. Once I.D.'d, the mystery grows: she was believed to have been murdered 10 years earlier and her husband has spent a decade on Death Row for the crime. Where was she all those years, and who found and killed her for real this second time? Rich comic relief is provided by the upcoming wedding of Britt's ever-pregnant friend Angel (picture bridesmaid Britt in a salmon-colored dress with a bustle), while emotional hurts surface with the cracking of the normally calm façade of Britt's mother, who holds a key to the mystery. A white-knuckle climax tops this outstanding effort.