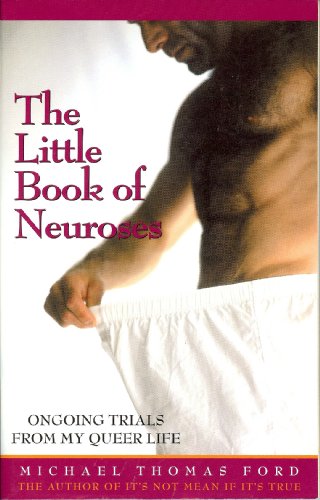 THE LITTLE BOOK OF NEUROSES: Ongoing Trials From My Queer Life

Two-time Lambda Literary Award winner Ford's fourth collection of essays offers the adorably cranky humorist the opportunity to rant on how magazine made him gay, offer relationship tips for the neurotically inclined and muse on how eBay allows us to relive our childhood by buying back our past. He also offers amusing quizzes on becoming leathermen, porn stars, drag queens, sluts and gym rats. Whether he's bemoaning the lack of romance in gay cinema ("A stripper nicknamed 'Beer Can' [in ] is no match for Cary Grant"), spoofing interviews with straight celebrities in gay magazines ("Do you know anyone who knows Cher?"), presenting a pseudo paper on therapy that can cure heterosexuality, or proposing a new TV show called (straight contestants get rewards for every step toward queer life), Ford is a delightfully inventive wit. The surprise of this collection is not his reliably funny ruminations but the periodic somber, thought-provoking pieces in which Ford forgoes his usual levity and speaks from the heart. These pieces—including one on the Church's shameful treatment of priests dying of AIDS and another that serves as an ode to the demise of two gay-lesbian bookstores—won't come as a surprise to those who have read Ford's recent . Their inclusion enhances the collection and deepens Ford's voice and broadens his appeal.