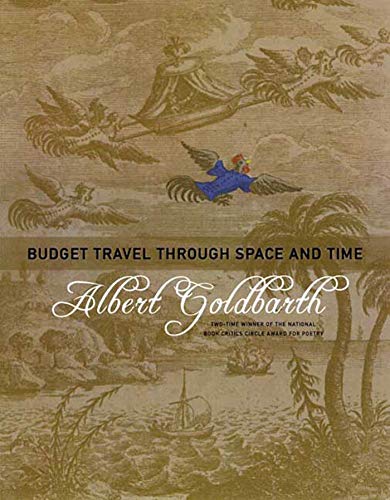 BUDGET TRAVEL THROUGH SPACE AND TIME

Goldbarth's 23rd volume of verse begins with a joke about astrophysics and ends with a man kneeling to kiss "the mouth of the Sphinx"; in between, the improbably exuberant, undeniably polymathic and frequently moving poems and sequences touch on sinking Pacific islands, ancient Martians, "the rather ramlike bas-relief faces of Babylonian gods," the first few American presidents, Yiddish words, pickpockets, tattoos and prayers. Almost all these topics illuminate one another; Goldbarth ( , etc.) can connect anything to anything else in a heartbeat. Though Goldbarth's rapid, slightly talky style has not changed since his last few outings (two of which picked up National Book Critics Circle Awards), the volume marks a new publisher and perhaps a new balance between Goldbarth's recent gravity and his much-appreciated levity. Many poems concern aging and time, in individuals and in civilizations, from cave paintings to the amorous, ill-fated, erotic entanglements of patients in nursing homes. Readers of science writing, of science fiction, of personal essays, of American or Jewish history should find something to love in Goldbarth's "lollapalooza kaboom/ in inventing the future," and his "equal urge to reconstruct/ and solve the past."