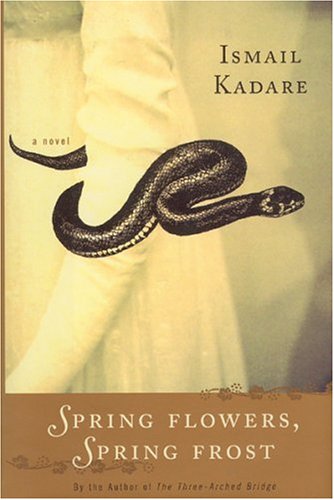 Working at the intersection of allegory and reality, Kadare (, etc.) balances the forces of expression and repression in his latest novel, about an Albanian artist who struggles to keep his sense of equilibrium when the post-Communist government threatens to bring back the so-called "blood laws," which dictated behavior in the country's medieval past. Mark Gurabardhi is the protagonist, a sensitive soul who finds himself disturbed by political events in his strife-torn country, as well as by a bizarre bank robbery and a strange, lurid report that an attractive young woman has married a snake. Closer to home, Gurabardhi's relationship with his girlfriend—who also models for him—is an up-and-down affair, but what changes the artist's situation is the sudden death of his boss, the director of the art center, who is killed in murky circumstances. His death prompts Gurabardhi to investigate the rumor that the repressive government is about to reintroduce the ancient, family-oriented blood laws to help tighten their control of artistic expression. To learn more, Gurabardhi finds a way to eavesdrop on a conference of prominent leaders. The political turns personal when the artist's girlfriend reveals that her brother is being hunted by the state, and the book closes with the artist making a formal inquiry to the police chief to see if the old laws will be reinstated. Kadare's plotting is sometimes spotty and disjunctive, but despite the lack of continuity, each scene is as tight as the writer's razor-sharp prose. The juxtaposition of ideas and bizarre images is alternately beautiful, peculiar and provocative, as Kadare once again provides an excellent glimpse at the difficult nature of life in a politically unstable land.