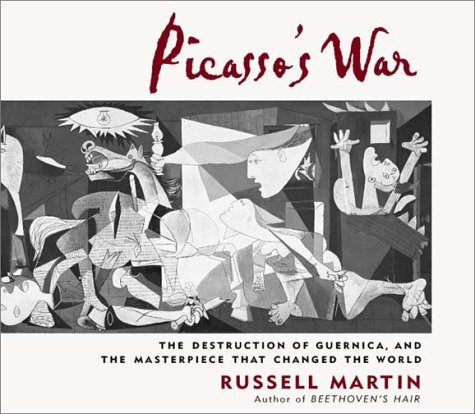 PICASSO'S WAR: The Destruction of Guernica, and the Masterpiece That Changed the World

"Painting is not done to decorate apartments. It is an instrument of war." So said Spaniard Pablo Picasso, who created the famous painting during the Spanish Civil War in reaction to the Nazis' bombing of the Basque village of the same name. is widely regarded as the best known work of anti-war visual art ever made. Wyman takes a friendly, straightforward approach to reading Martin's historical and personal account of the life of the massive painting, reminiscent of a favorite college professor. His occasional accents work more as an indication of a change of speaker rather than as convincing characters, but his enthusiasm for this saga of art, politics and tragedy makes it a winning performance. The story of 's life after its creation is as fascinating as the events that inspired it are horrific. After the painting received much criticism when it was first exhibited in Paris in 1937, the world later deemed it a masterpiece. New York's Museum of Modern Art kept it safe from the political turmoil in Spain for decades until it was finally demanded back in the 1980s. In 2001, when Martin () finally saw the work—a monument to the horrors of war—he was told by a stranger that he should get to a television. It was September 11. Martin is now speaking publicly about the parallels between the "terror and unspeakable cruelty" of September 11 and , making this a surprisingly timely audiobook.