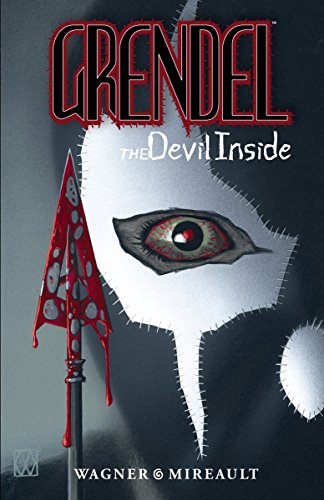 Grendel: The Devil Inside

Grendel is a character who comes close to defying description. He's inhabited a number of people over time, and the only constants through these stories are his psychosis and distinctive mask. In this chapter of Wagner's multi-generational saga, Grendel possesses a down-on-his-luck stage manager in a near-future New York, and pushes him into a murder spree. This tale, which originally appeared as a three-part miniseries in 1987, is a product of its time. Wagner's oblique script seemed daring and naturalistic then, but now comes off as coy. Similarly, some of his narrative techniques seemed groundbreaking at the time (e.g., the narrative captions displayed as handwritten journal entries), but now feel quaintly similar to contemporary works like Frank Miller's and Alan Moore's . Mireault's art ages better (with the exception of his design for the police detective, who sports a Flock of Seagulls haircut), retaining its "underground comix" edge and conveying a sense of a desolate, urban environment without sacrificing clean lines or clear storytelling. Given Wagner's reluctance to resort to straightforward exposition, this isn't a book for casual readers, who will likely miss some of the resonance that Grendel aficionados will find rewarding. However, longtime fans will welcome this reprint of one of the more innovative chapters in Wagner's 50-plus–part saga.