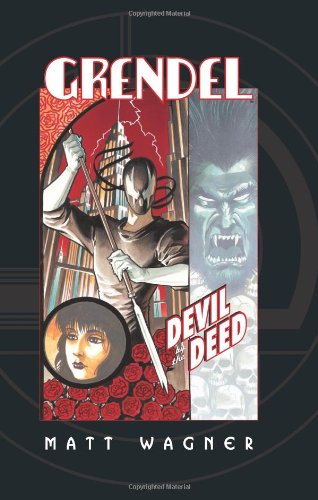 Grendel: Devil by the Deed

his 25th anniversary edition reprints what began as an inconspicuous backup feature but has blossomed into a classic dark saga of the ultimate counter-Batman. Hunter Rose is a wealthy and glamorous socialite who also is the masked assassin Grendel, master of the underworld but obsessed with destroying his archfoe, the cursed, centuries-old wolfman Argent. Meanwhile, Rose's innocent ward, Stacey, discovers his secret and coldly plots against both villains, becoming monstrous herself in the process. The fundamental story is silly, over-the-top pulp fiction. Wagner makes it readable and memorable first by filtering the action through several layers of narrator/interpreter so that a reader isn't confronted by gruesome lunacy but is encouraged to imagine the lurid details. Secondly, Wagner experiments with the form of comics by turning each page into an elegant Art Deco design in which blocks of narrative text are embedded; Finally, he succeeds in tantalizing readers' hope and dread that some of Grendel's aloof, fierce spirit may be alive in all of us. For better or worse, he helped introduce the age of the antihero in comics.