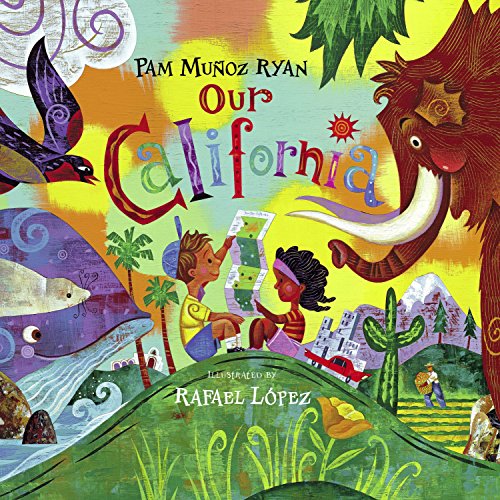 López's ( ) stylized, exuberant paintings make it clear why no other state in the continental U.S. has California's magical pull on the popular imagination. A whirlwind loop tour whisks readers through the Golden State, starting with the beaches of San Diego, heading up to L.A. and beyond to Gold Country, then swinging down through Yosemite (depicted in a stunning nighttime vertical spread) and Death Valley before ending up poolside at Palm Springs. Ryan's ( ) quatrains often take on an earnest, textbook-like tone: “The Great Central Valley, with its plentiful yields,/ feeds the whole nation from its orchards and fields.” López's illustrations, paintings rendered on wood and sometimes distressed, remain fresh and surprising as he finds ways to express wonder and affection. On some spreads he seems to be channeling the spirit of the great WPA and Mexican muralists; on others, he releases a more graphic-novel spirit, as in the depiction of a '49er with a marvelously greedy glint in his eye. Beyond its obvious use in a classroom, this title is virtually certain to inspire California dreamin' in readers of all ages. Ages 6-9.