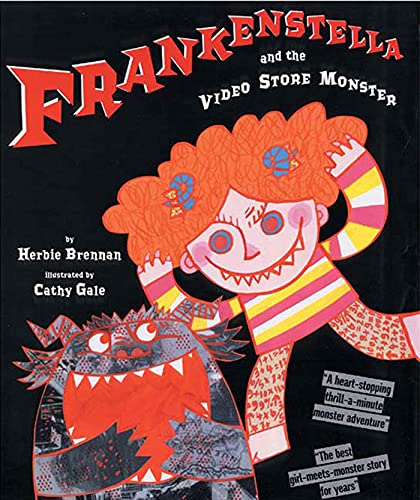 FRANKENSTELLA AND THE VIDEO STORE MONSTER

In this riotous creature feature, which echoes the emotional themes of Jules Feiffer's and Molly Bang's , a frustrated girl transforms into an Incredible Hulk-ish giant. On a trip to the video shop, Stella warns her mother about the monster hiding "in the dark corner where they kept the dusty old movies nobody wanted to rent anymore." But small, quiet Stella cannot make herself heard, and her nonchalant parent totters toward a horned shadow: "At which point the monster ate her." At this (unpictured) instant, the heroine becomes so incensed that she metamorphoses into a jagged-toothed ogre, smiling as she roars, "I'm ! And I eat monsters for my breakfast!" She rescues her mother, hurls the frightened monster out to sea (it gets a life preserver) and shrinks to her original size. Brennan () favorably compares the righteous tantrum to chiller-movie mayhem; Frankenstella vanquishes a cackling video clerk who had teased her, and her rampage is cheered by upstanding citizens. Gale () forgoes conventional black outlines for screaming-red lines on blazing yellow backgrounds; in her crazy-quilt collages of cut paper and scribbles, arrows and block-printed symbols fly every which way, suggesting an off-kilter weather map or a stormy temper. This cathartic book packs a visual punch, and makes good sport of one's inner and outer demons. Ages 4-up.