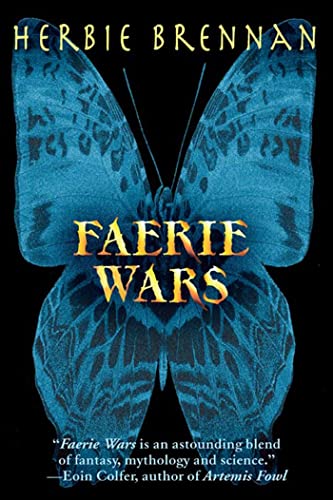 Two worlds collide in Brennan's () humorous tale of warring Faerie factions and their impact on the "real" world. Young Henry Atherton, troubled by the impending disintegration of his parents' marriage, stumbles upon the discovery of a lifetime when he saves a Faerie, Pyrgus Malvae, from the clutches of a cat that mistook him for a butterfly. Pyrgus teaches Henry about the portals that connect the land of Faeries with the human world. As heir to the throne of the Faerie realm, Pyrgus must hide from the agents of the Faeries of the Night, the sinister element of the magical kingdom. And if Pyrgus didn't have enough problems with Lord Hairstreak, leader of the "Nighters," the evil Silas Brimstone is also after him. Brimstone may be one of the nastiest villains in recent memory—the success of his glue factory, for example, is due to a secret ingredient: kittens. Brennan adeptly uses the fish-out-of-water element to make political and social commentary (e.g., Pyrgus is an ardent animal rights activist whose arguments echo many that readers will recognize); he also gently handles some difficult topics (Henry's parents are on the rocks because his mother is having a lesbian affair). Less militaristic and more artistic than Eoin Colfer's wildly successful Artemis Fowl books, this will still bring much pleasure to fans of that series, and to fantasy readers in general. Ages 12-up.