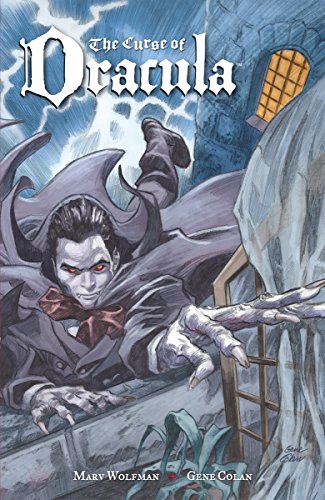 The Curse of Dracula

Wolfman and Colan collaborated on one of Marvel Comics' outstanding series of the 1970s, . Lately Marvel has been less welcoming toward comics veterans, but in 1998 Dark Horse invited Wolfman and Colan to devise the new Dracula series that has been collected here. The center of was Wolfman's rich portrayal of Dracula, a figure who combined aristocratic grandeur and viciousness, capable of both love and despair. 's Dracula is a more one-dimensional figure of pure evil. His scheme is intriguing: he is the power behind a presidential candidate whose wife is his love slave. But they too submit to Dracula without qualms. Wolfman's new vampire hunters display the psychological toll of their grim calling, yet never come alive as individuals. One of the great comics artists of the 1'60s and '70s, Colan is also one of the last belonging to the brilliant illustrative tradition of Alex Raymond. is printed directly from Colan's penciled artwork, enabling readers to see his fine line work and atmospheric shading, which no inker can capture. Despite the explicitly gruesome subject matter, Colan's art is reason enough to buy this book.