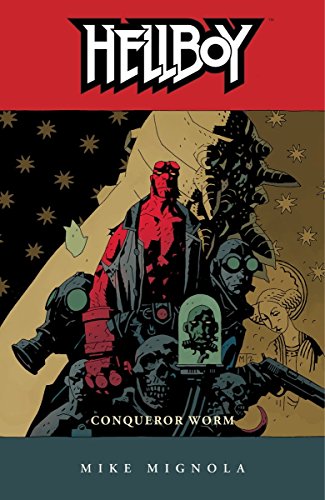 Winner of the 2002 Eisner Award for Best Limited Series, this story promotes Guillermo del Toro's upcoming film by reminding readers how fine Mignola is as a visual creator and how skilled he is at setting up outrageously melodramatic scenes to illustrate. Hellboy was a baby demon retrieved by psychic investigators who couldn't bring themselves to destroy the little imp. They brought him up to be a not-especially-secret agent of the Bureau for Paranormal Research and Defense. In this story, the massive, red-skinned hero is sent to investigate the ruins of a castle where Nazis conducted occult/scientific experiments, accompanied by his colleague Roger the Homunculus and supposedly aided by a blonde Austrian agent who isn't what she seems. They soon encounter undead Nazis, space aliens and the early 20th-century costumed crime fighter Lobster Johnson. Meanwhile, a space capsule launched from the castle in 1939 is about to land, containing an evil spirit from the stars. From here, the plot sails into even weirder territory. Readers who let themselves be carried along, however, can enjoy beautifully designed pages full of dark shadows and images of skulls and gargoyles. Hellboy might look silly on a midtown street corner at high noon, but it's hard to laugh at him as he fights monsters in dark gothic crypts draped with tattered swastika banners. Mignola counts on the power of the art to push his readers through thickets of absurdity until they come out the other side, into a state of delirious wonder. Sometimes he succeeds.