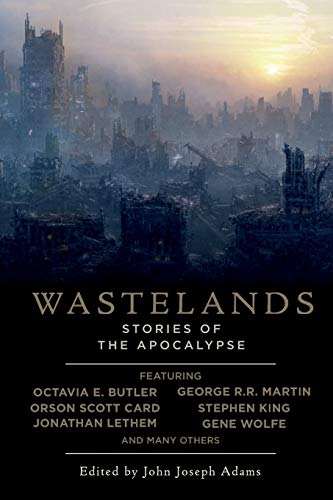 Wastelands: Stories of the Apocalypse

This harrowing reprint anthology of 22 apocalyptic tales reflects the stresses of contemporary international politics, with more than half published since 2000. All depict unsettling societal, physical and psychological adaptations their authors postulate as necessary for survival after the end of the world. Keynoted by Stephen King’s “The End of the Whole Mess,” the volume’s common denominator is hubris: that tragic human proclivity for placing oneself at the center of the universe, and each story uniquely traces the results. Some highlight human hope, even optimism, like Orson Scott Card’s “Salvage” and Tobias Buckell’s “Waiting for the Zephyr.” Others, like James Van Pelt’s “The Last of the O-Forms” and Nancy Kress’s “Inertia,” treat identity by exploring mutation. Several, like Elizabeth Bear’s “And the Deep Blue Sea” and Jack McDevitt’s “Never Despair,” gauge the height of human striving, while others, like George R.R. Martin’s “Dark, Dark Were the Tunnels,” Carol Emshwiller’s “Killers” and M. Rickert’s “Bread and Bombs,” plumb the depths of human prejudice, jealousy and fear. Beware of Paolo Bacigalupi’s far-future “The People of Sand and Slag,” though; that one will break your heart.