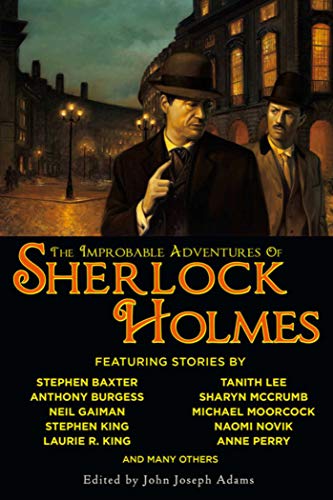 The Improbable Adventures of Sherlock Holmes

For the most part, this volume of short Sherlock Holmes pastiches—a mix of straightforward imitations and parodies—delivers on its goal of presenting the best of such work from the last 30 years. All but one of the 28 entries is a reprint, largely from such recent anthologies as and , and many introduce the supernatural into the rational sleuth's world. Stephen King does a solid job of giving Dr. Watson a chance to show his own detective skills in “The Good Doctor.” Barbara Roden's “The Things That Shall Come Upon Them” riffs cleverly on M.R. James's “Casting the Runes.” Perhaps the highlight is Peter Tremayne's “The Specter of Tullyfane Abbey,” which offers a plausible explanation for a classic untold tale in which a man disappears from the face of the earth after returning home to fetch an umbrella. Holmes authority Christopher Roden provides an introduction.