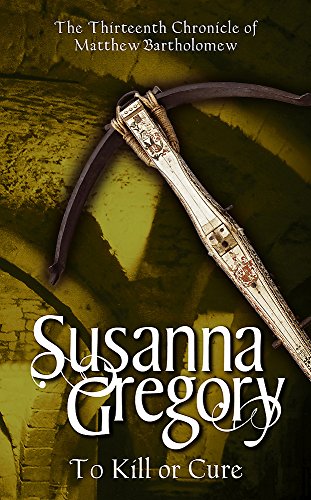 To Kill or Cure

A murderous town-and-gown conflict propels the action of Gregory’s engrossing 13th mystery set in 14th-century Cambridge and featuring physician Matthew Bartholomew (after 2006’s ). The various university colleges have been keeping students’ rents low so they can afford their academic fees, but avaricious landlords now want to triple the rents, a threat to the colleges’ existence. Meanwhile, Bartholomew and his three fellow Cambridge physicians find their income drained off by the chicanery of phony Richard Arderne, out to make a killing healing the sick and raising the dead by waving a supposedly magic feather. Three grisly murders add to Bartholomew’s woes. Though the narrative often bogs down in philosophical disputations, Gregory excels at recreating the faces, menus, sounds and putrid smells of a medieval English town just recovering from the Black Death. Strong-stomached readers will relish this trip into England’s grim and grimy past.