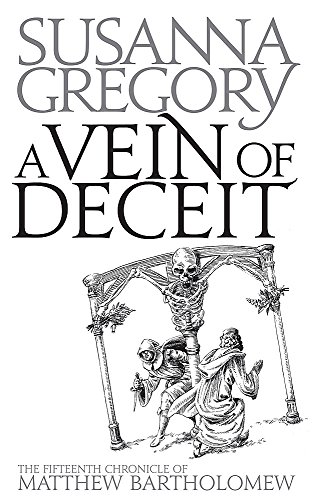 A Vein of Deceit

The many characters, murders and possible motivations tend to overwhelm Gregory's 15th Matthew Bartholomew chronicle (after 2008's ). Late one night in 1357, Bartholomew, a doctor associated with Cambridge's Michaelhouse College, receives a summons to attend an ailing pregnant woman, Joan Elyan. Despite his ministrations, Elyan dies, apparently from a dose of a medicine used to end pregnancy. To Bartholomew's horror, he finds that the drugs may have come from his own stores. The physician is further dismayed to learn of evidence of embezzlement from Michaelhouse by a trusted friend, who dies before he can be confronted. Several more deaths, the theft of some precious chalices and a brother-sister pair of villains who believe Michaelhouse has something that belongs to them complicate an already complicated plot. Still, Bartholomew remains a credible and sympathetic amateur sleuth.