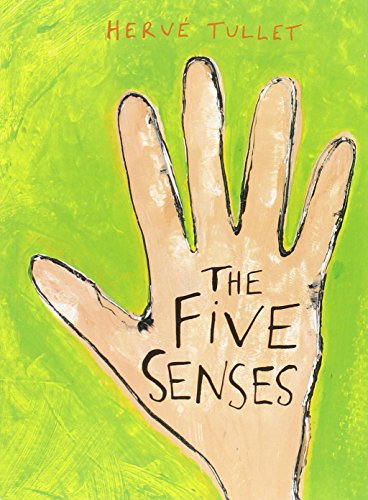 Tullet playfully prods readers to notice their sensory experiences in this mixed-media mélange. Rather than define each sense literally, he loosely groups images under "see," "hear," "smell," "touch" and "taste," with humorous handwritten comments. (He also wonders, in a conclusion reeling with spirals, arrows and Rorschach blots, "Which way is the 6th sense?") In "See," 10 eyes with unmatched irises appear on a white page with the command, "Look me in the eye!" A café table with two empty chairs illustrates "the invisible man having breakfast with a friend," and a reflective silver rectangle prompts the question, "Who is the fairest of them all?" Visual puzzles abound: "Four squares/ or a cross?," Tullet asks, as the negative space of the squares forms a plus sign. Due to the visual nature of an artist's book, the eyes have it, but the other senses are creatively invoked too. "Hear" presents childlike outlines of birds with blotches of bright color to represent their songs, and a crackly bound-in plastic sheet calls attention to the sound of pages turning. One die-cut "Smell" page is shaped like a pointy nose with cut-out nostrils, and hungry bites have been taken from a "Taste" page of a gooey red strawberry. "Touch" features a glued-in Braille alphabet, handprints in a palette that suggests a cave wall, and shadowy pink and blue figures embracing. A few seek-and-find games ("You can't eat these except ! which one ?") round out the entertainment in a plotless book where random discoveries add to the pleasure. Ages 8-up.