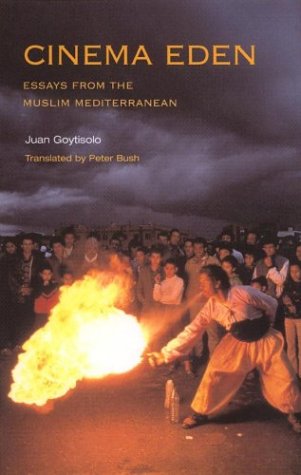 Juan Goytisolo, Author , trans. from the Spanish by Peter Bush.

Spain's great expatriate writer Goytisolo conveys his passion for Islamic popular culture in sensuous, bustling prose. He tours the thronging citadels of Arab cosmopolitanism and celebrates the clowns, bike artistes and musicians of Marrakech, his adoptive city. He recounts delighting in the scintillating karate and Bollywood repertoire of his local flea-pit cinema—teasing his reader with hints of genre theory. Goytisolo writes like a self-conscious modernist. Istanbul he praises for its "polyglot discourse," its panoramas, bazaars, baths and oiled Turkish wrestlers. Cairo he appreciates for mingling weddings and funerals, bringing feelings of regeneration to his spirit. Scholarly in his explications of popular Islam's complex hagiography and system of brotherhoods, Goytisolo clearly values the sheer spectacle of Islamic pilgrimage and festival. His biography of the 13th-century dervish poet Mawlana is racy and appears to echo aspects of his own unusual literary career. Personal literary influence looms large when Goytisolo contemplates the provocative oeuvre of Jean Genet at the poet's cliff-side grave in Larache, Morocco. In the most fictionalized and playful of all these essays, Goytisolo recalls his first visit to Turkey in 1979, after a military coup. Wandering among the cave towns and rock formations of Cappadocia, he encountered an enigmatic elderly man who had claimed that Gaudí (long dead) was living as a recluse nearby and was busy carving out creations in the surrounding valley. A deliciously pretentious aesthete, Goytisolo unashamedly romanticizes popular Islamic life in beguiling, immensely readable, poetic prose.