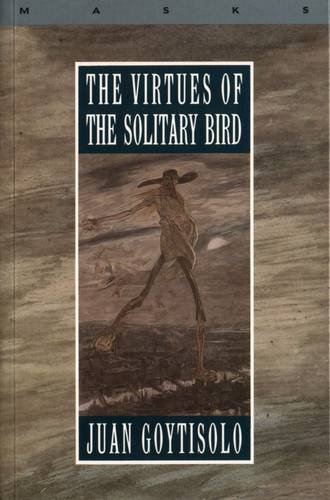 The Virtues of the Solitary Bird

The solitary bird of Spanish writer Goytisolo's novel is a figure of many identities, all belonging to individuals in some way dispossessed. In a feminine guise, the solitary bird suffers from a disease that leaves her not only ``emaciated, covered with buboes,'' but persecuted, imprisoned ``in her hermetic cell'' so she cannot contaminate others. St. John of the Cross, the Spanish poet and mystic, also figures as the solitary bird. Writing of ``the intoxication and joyful consummation'' of the soul with God, he was singled out by an ``all-powerful ecclesiastical machinery'' that would not tolerate his personal, sensual spirituality. Finally, the figure doubles for Goytisolo himself, self-exiled from Spain for many years. Drawing on these scraps of personae, Goytisolo ( Juan the Landless ) creates a single voice that resonates broadly. The solitary bird's nightmarish account of pursuit by gangs ``wearing rubber gloves and gauze masks'' is the AIDS victim's experience of society's paranoia. It is also the story of the independent thinker throughout history, flushed out by those fearful of ``contaminating ideas.'' Goytisolo finds in those attributes that set the solitary bird apart--which are to him virtues--an aesthetic from which he derives a fiery, mercurial style. From St. John's poem ``The Spiritual Canticle,'' Goytisolo adopts ``his tense, fragmented turns of phrase . . . his insular and ecstatic spaces . . . fluctuating between the freedom and the gloom of his spiritual night.'' As fiercely dedicated to imaginative freedom as Goytisolo is in this uncompromising, difficult novel--expertly rendered into English--his moments of greatest power and poignancy come when he descends into the solitary bird's dark night of the soul. Considering the source of her illness, she asks: ``might not the Beloved from whose wine cellar we drank and whom we abandoned satiated with his delightful knowledge be the instrument chosen by destiny to annihilate us?'' Does the solitary bird die, like St. John, for having loved God or does she die, like contemporary men and women stricken with AIDS, for human love? Goytisolo does not answer, but offers this novel, a by turns wrenching and ecstatic song of ``the solitude of wounded love.'' (Jan.)
close
Details