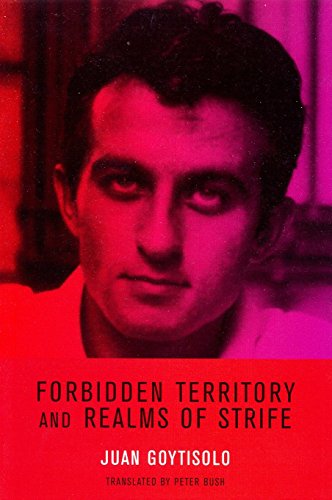 FORBIDDEN TERRITORY AND REALMS OF STRIFE: The Memoirs of Juan Goytisolo

In exile since the Franco regime vilified him for his frank mixture of leftist and bisexual politics, Goytisolo () is a Spanish writer who left for Paris in 1956. His books, some 30 of them by now, are rife with historical metafiction, plays on his literary status and denunciations of Spain's colonizing past. This beautifully written memoir, first published in Spanish as two volumes in the 1980s, covers the first 30 or so years of Goytisolo's turbulent, cafe-centered life, stretching from the Barcelona of Fascist bombardments during the Spanish civil war to the '60s, encountering cultural heroes like Genet, Che, Castro and Cortázar along the way. Under a hail of Franco's bombs, Juan and his brother Luis, also a writer, plunge into literary activity, reveling in the contradiction that only censorious regimes, it seems, truly value literature. From then on it's all Faulkner, illicit sex and a French girlfriend. Lucking into a Parisian fashion for peninsular writers in the '50s, Goytisolo is published by Gallimard and starts hanging out on the Left Bank. This is literary history up close: from Genet's drug of choice (Nembutal) to Raymond Queneau's housekeeper or running a literary magazine () in what later became a couscous shop. Mixed in with the usual Euro-scribe's predilection for petitions and fellow-traveling are Goytisolo's adventures in what he calls the "Sotadic zone," or the world of macho Arabs who swing both ways. But style is king here, and it is wonderful, infiltrating Goytisolo's chronological narrative like one of his own characters.