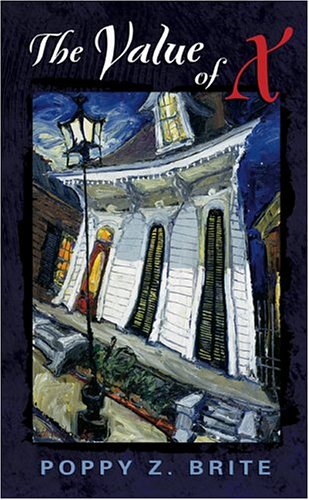 THE VALUE OF X

New Orleans native Brite has a number of horror novels to her credit and is a minor cult figure in goth kid circles (she is also the author of ). Her latest novel is a rose-tinted gay coming-of-age story set on the mean streets of New Orleans' rundown Lower Ninth Ward. The son of hardworking blue-collar Catholic parents, 16-year-old Gary Stubbs is growing increasingly troubled by his sexual feelings for John Rickey, his best friend since childhood. Rickey, living with his divorced mom, takes the realization that he himself is gay in stride, but he is afraid his feelings are not reciprocated by Gary. However, it is hardly a surprise when they become teenage lovers during a weekend alone at Rickey's house. Despite some injudicious escapades, they manage to keep their secret over the next two years while finishing high school and acquiring cooking skills in a succession of New Orleans restaurants. To keep them apart, Rickey's parents offer him the chance to attend the Culinary Institute of America in upstate New York to study to become a serious chef. Although Gary protests that it will be the end of them as lovers, the prospect is too good to refuse. The separation confronts both with temptations, but their reconciliation is a foregone conclusion. Brite's novel is clumsy feel-good pulp, but its artless sweetness is a welcome respite from more jaded gay genre fiction.