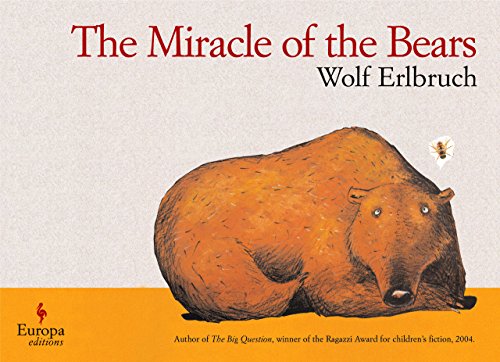 The Miracle of the Bears

Erlbruch's ( ) bumbling, earnest young bear wakes up from hibernation with a single thought on his mind: fatherhood (that is, after he eats). He lounges casually among the birches, "thinking happily about how he might become a big strong papa bear." But then he realizes that he doesn't know how, and turns in a flash from a competent, devil-may-care prospective father into a dope. "Can somebody tell me how one goes about having a bear cub?" he yells into the forest (a hunter lurks nearby). He finds explanations offered by other animals to be cryptic. The magpie says, "You lay an egg, and you brood it," but of course the bear can't, although he tries, squatting and looking expectantly at his rear. The stork is no help, either. This humorous lead-up gives every sign that the narrative will reveal exactly what it is that papa and mama bears do to make cubs, but Erlbruch retreats at the final moment. A "pretty girl bear" appears and takes the bear off to "a soft place in a glade, in the middle of some long, some very long, grass," and... the book ends right there. Comedy works best if the reader knows something the hero doesn't, and children who don't know how little bears are made may well remain mystified. But the bear's too-big waistline, fuzzy brown coat and long snout seem remarkably human, and older readers in search of a little romance will be charmed. All ages.