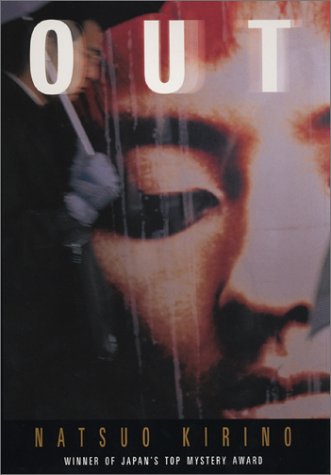 Four women who work the night shift in a Tokyo factory that produces boxed lunches find their lives twisted beyond repair in this grimly compelling crime novel, which won Japan's top mystery award, the Grand Prix, for its already heralded author, now making her first appearance in English. Despite the female bonding, this dark, violent novel is more evocative of Gogol or Dostoyevsky than . When Yayoi, the youngest and prettiest of the women, strangles her philandering gambler husband with his own belt in an explosion of rage, she turns instinctively for help to her co-worker Masako, an older and wiser woman whose own family life has fallen apart in less dramatic fashion. To help her cut up and get rid of the dead body, Masako recruits Yoshie and Kuniko, two fellow factory workers caught up in other kinds of domestic traps. In Snyder's smoothly unobtrusive translation, all of Kirino's characters are touching and believable. And even when the action stretches to include a slick loan shark from Masako's previous life and a pathetically lost and lonely man of mixed Japanese and Brazilian parentage, the gritty realism of everyday existence in the underbelly of Japan's consumer society comes across with pungent force.