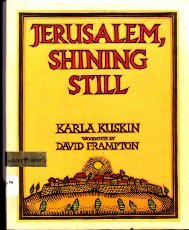 Beautifully crafted, like a piece of radiant sculpture, this is an exquisite hymn to one of the world's great cities. To create mood, Kuskin uses a first person narrative voice and addresses her readers directly, inviting them to ""Sit beside me.'' She then treats them to a poetic rendering of Jerusalem's history, from David, who made shaking sky clouds bump against each other, through the present day paradox of physical magnificence with interfaith tensions. Kuskin uses repetitve phrases to explain the waxing and waning of wealth and ruination, such as ``When times are bad they will get better'' and its reverse. With rhyme she reinforces the soaring power of the narrative, ``You have not forgotten that after the Babylonians came from Babylonia, the Greeks came and then the Romans, those worshippers of Gods and omens. Then the Persians came in troops, Moslems followed, groups and groups, the Fatimid Egyptian forces, Seljuk Turks on foot and horses. After that the Crusaders, Saladin and more Moslems, the Mamelukes and the Ottoman Turks all came to stay, for a while, and went away.'' Frampton's impressive woodcuts cast the right golden glow, bringing us, just as the author intended, closer to the hills of stone that David saw and we can still. All ages. (September)
close
Details