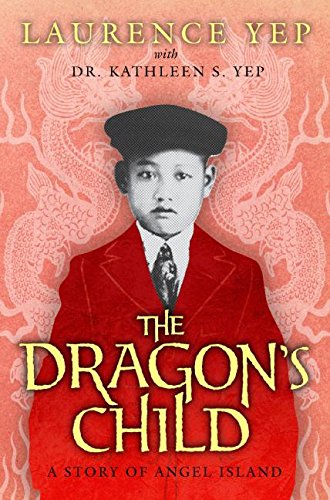 The Dragon's Child: A Story of Angel Island

This short novel about a father and son's journey from rural China to San Francisco in 1922 will firmly grip the target audience. The nine-year-old narrator, who is modeled on Laurence Yep's ( ) father, describes his shy reintroduction to his own father, a “Guest of the Golden Mountain” (someone who lives in America) who has returned to his family's village in China, this time to bring the narrator back to San Francisco with him. The narrator perceives his father as rich and successful, but he also sees that his father sticks out “like a flagpole” in his village. As the journey begins, the boy slowly learns hard truths: the father's impressive clothes have been rented, and he works as a houseboy (“The clan would have laughed at the notion,” the son notes grimly). All the while the two prepare for immigration tests to be administered at Angel Island outside San Francisco, knowing that failure means deportation; only during this test do readers finally learn the boy's name. Yep's use of the boy's perspective enables the reader to experience a spectrum of emotions (curiosity, homesickness, fear) in tandem with learning historical facts—a trick that lends the book both authenticity and charm. PW. Ages 8–12.