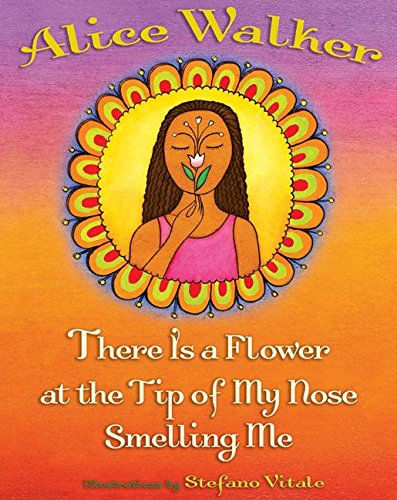 Walker ( ; ) praises the surroundings that fortify the human experience. In her vision, people do not work their will on the things around them, but rather the people and the universe influence each other: "There is a flower/ At the tip/ Of my nose/ Smelling/ Me./ There is a sky/ At the end/ Of my/ Eye/ Seeing/ Me." Vitale ( ) paints great swaths of sunset sky that glow from the horizon, illuminating the serene face of a dreaming girl who looks as if she would be at home anywhere. "There is a dance/ That lives/ In my bones/ Dancing/ Me," reads the text, as the heroine, charged from within by streams of incandescent energy, leaps and sways in swirls of sunlight that stream out from her fingertips. "There is a story/ At the end/ Of my arms," Walker concludes, "Telling/ Me!" Now a rainbow falls over the girl's face, and creation holds out marvelous possibilities. Smaller versions of herself surround the girl in a frieze: in these miniature images she flies, dives into the waves with a fish and climbs the leaves of an enormous white flower to kiss its face. It's less a story than an illuminated prayer—an expression of gratitude for one girl, all humans and the whole of the cosmos. All ages.