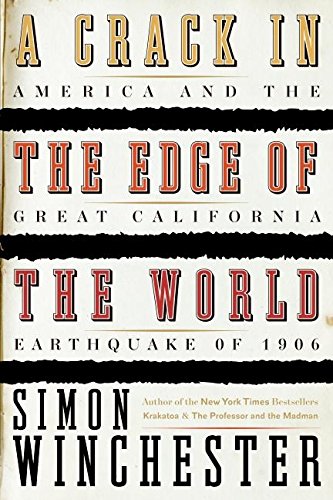 A Crack in the Edge of the World: America and the Great California Earthquake of 1906

In this brawny page-turner, bestselling writer Winchester ( , ) has crafted a magnificent testament to the power of planet Earth and the efforts of humankind to understand her. A master storyteller and Oxford trained geologist, Winchester effortlessly weaves together countless threads of interest, making a powerfully compelling narrative out of what he calls "the most lyrical and romantic of the sciences."

Using the theory of plate tectonics introduced in 1968 by an obscure geologist, J. Tuzo Wilson, Winchester describes a planet in flux. Across the surface of the earth, huge land masses known as plates push and pull at each other. At 5:12 a.m. in 1906, the North American and Pacific plates did precisely that. Along a 300-mile fault east of the Gold Rush city of San Francisco, the earth, in Winchester's word, "shrugged." While the initial shock devastated large parts of the city, it was the firestorm that raged in the days following that nearly wiped San Francisco off the map. The repercussions of the disaster radiated out from the epicenter for years to come. Locally, Winchester finds in the records at City Hall that the destruction led to a huge rise in Chinese immigration. Winchester also cites the tragedy in the rise of the nascent Pentecostal movement, whose ranks swelled in the months and years after in the belief that the catastrophe had been a sign from God.

With fabulous style, wit and grace, Winchester casts doubt on the very notion of solid ground and invites the reader to ponder the planet they live on, from both inside and out. B&w illus. and maps.