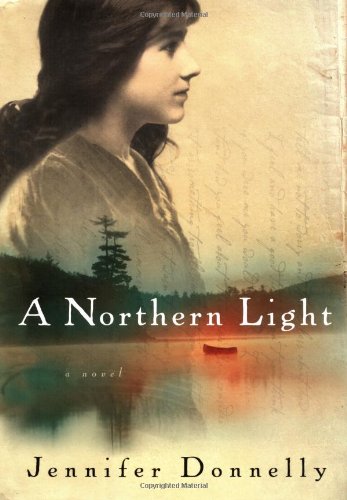 Donnelly's () riveting first novel for young adults, like Dreiser's , was inspired by the Chester Gillette case. Narrated by 16-year-old Mattie, who works at the Glenmore Hotel on Big Moose Lake, the book begins on Thursday, July 12, 1906, the day a search party discovers the drowned body of Grace Brown, a hotel guest. Earlier that day, Grace had given to Mattie a bundle of letters to burn, her correspondence with Gillette. As the mystery behind Grace's death unfolds, flashback chapters fill in details of Mattie's life on her family's farm. Each begins with her "word of the day," which firmly establishes Mattie's love of language and which ties in with the unfolding events. Readers soon discover that her teacher considers Mattie to be a gifted writer and, at the woman's urging, Mattie applies to Barnard College and receives a full scholarship. But as the oldest daughter of a widowed father, Mattie feels an obligation to stay on the farm, and her budding romance with handsome Royal Loomis adds further complications. Each character contributes to the narrator's growing awareness of the narrow possibilities available to women at the turn of the 20th century. Her friendships with Weaver (the only other student with college aspirations, as well as the only African-American boy in their town) and her teacher (who has a secret of her own) are especially well realized. The author's ability to recast the murder mystery as a cautionary tale for Mattie makes the heroine's pending decision about her future the greatest source of suspense. Ages 12-up.