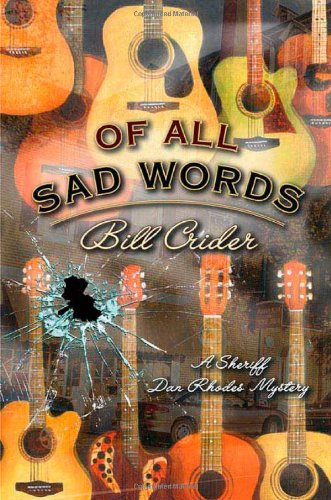 Of All Sad Words: A Sheriff Dan Rhodes Mystery

Crider's winning 15th Sheriff Dan Rhodes mystery (after 2007's ) pits the wry Texan against a local drug ring. Skeptical when Clearview, Tex., newcomer C.P. Benton complains that his neighbors, the Crawford brothers, are cooking meth, Rhodes finds himself in the middle of a murder investigation when the Crawford trailer explodes, leaving one of the brothers dead. But instead of finding evidence of meth, Rhodes stumbles on a still with a fresh batch of old-fashioned hooch. The remaining Crawford brother plays dumb, blaming his sibling for the illegal operation, but Rhodes doesn't buy the act. The discovery of a second still complicates matters, and Rhodes must ignore his bickering deputies and a whiny county commissioner to get to the bottom of Clearview's crime wave. Crider expertly evokes this small Texas town and its eccentric cast of characters, and his dry humor will satisfy longtime fans of this popular series.