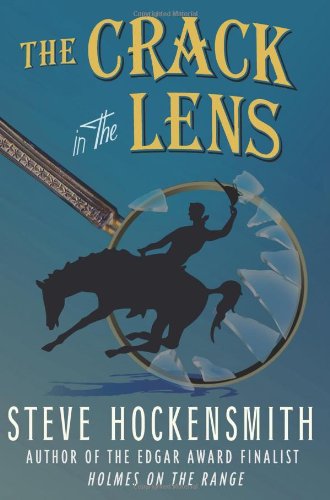 The Crack in the Lens: A “Holmes on the Range” Mystery

Set in 1893, a few weeks after the events of 2008's , Hockensmith's excellent fourth mystery to feature Otto “Big Red” Amlingmeyer and his older brother, Gustav (aka “Old Red”), takes them to San Marcos, Tex. The laconic Old Red, whose life took an unexpected turn after his brother introduced him to the deductive methods of Sherlock Holmes, reveals that the love of his life, hooker Gertrude Eichelberger, was murdered in San Marcos five years earlier. The pair's efforts to investigate put them at odds with the local pimps as well as the law. The brothers discover that Gertrude was but the first victim of a serial killer, who modeled his crimes after Jack the Ripper. The personal stake Old Red has in catching the murderer adds an emotional dimension to the puzzle, which Edgar-finalist Hockensmith nicely leavens with witty prose and cliffhanging chapter endings.