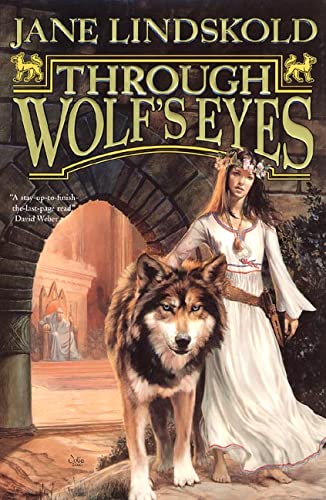 This engrossing tale of feral myth and royal intrigue from Lindskold (; and with Roger Zelazny) offers plenty of action as well as fascinating anthropological detail on the social behavior of wolves. From the wilderness to a kingdom bereft of royal heirs the ambitious Earl Kestrel brings Firekeeper, a young woman raised by magically enhanced wolves who promised her mother their care and her eventual reintroduction to human society. Firekeeper's new companions under the earl's protection include Derian Carter, who becomes her tutor and adviser; her wolf brother, Blind Seer (named for his un-lupine blue eyes, thought a deformity in puppyhood), who is now of an age to leave the pack and ramble; and the falcon Elation, another magically enhanced being, who spent a year as a captive hunter among humans and is adept at interpreting human language and actions. Many nobles dismiss Firekeeper as "little more than a freak," but wolf society proves a useful preparation for court intrigue: she "seemed to have no difficulty interpreting the relative degrees of importance" in social situations. Though she knows she'll never discard her wolf nature entirely, she finds mingling with her biological kind oddly rewarding, especially after dancing and music raise her opinion of the two-legs. Magic plays a minor if increasingly significant role. Maps and a family tree enhance a beautiful and complex book.