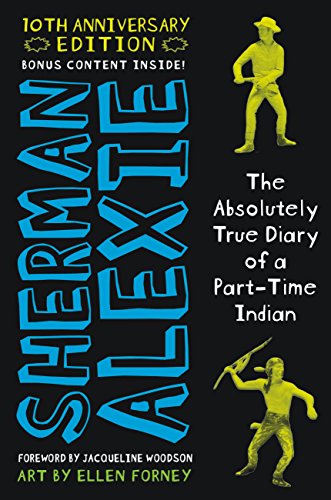 The Absolutely True Diary of a Part-Time Indian

Screenwriter, novelist and poet, Alexie bounds into YA with what might be a Native American equivalent of a coming-of-age story so well observed that its very rootedness in one specific culture is also what lends it universality, and so emotionally honest that the humor almost always proves painful. Presented as the diary of hydrocephalic 14-year-old cartoonist and Spokane Indian Arnold Spirit Jr., the novel revolves around Junior’s desperate hope of escaping the reservation. As he says of his drawings, “I think the world is a series of broken dams and floods, and my cartoons are tiny little lifeboats.” He transfers to a public school 22 miles away in a rich farm town where the only other Indian is the team mascot. Although his parents support his decision, everyone else on the rez sees him as a traitor, an apple (“red on the outside and white on the inside”), while at school most teachers and students project stereotypes onto him: “I was half Indian in one place and half white in the other.” Readers begin to understand Junior’s determination as, over the course of the school year, alcoholism and self-destructive behaviors lead to the deaths of close relatives. Unlike protagonists in many YA novels who reclaim or retain ethnic ties in order to find their true selves, Junior must separate from his tribe in order to preserve his identity. Jazzy syntax and Forney’s witty cartoons examining Indian versus White attire and behavior transmute despair into dark humor; Alexie’s no-holds-barred jokes have the effect of throwing the seriousness of his themes into high relief. Ages 14-up.