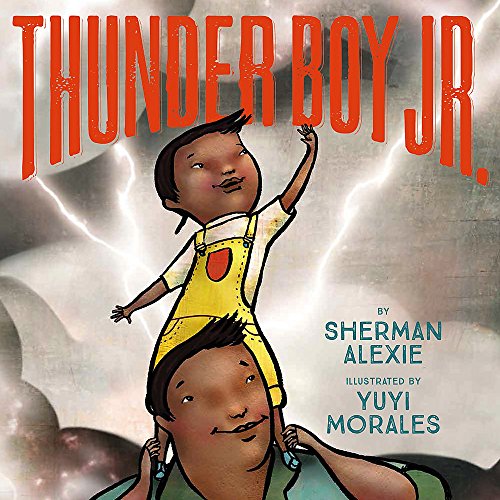 Echoes of Alexie’s The Absolutely True Diary of a Part-Time Indian resonate in this vibrant first-person tale, illustrated in a stormy palette by Morales (Niño Wrestles the World). “I am the only Thunder Boy who has ever lived,” says the young narrator. “Or so you would think. But I am named after my dad. He is Thunder Boy Smith Sr., and I am...” Here, his mother pops in from the right lower margin to complete the sentence: “Thunder Boy Smith Jr.” The boy confides that his father’s nickname, Big Thunder, sounds impressive, while his own nickname, Little Thunder, “makes me sound like a burp or a fart.” After confessing “I hate my name!” with a chorus of screaming snakes, wolves, and bears driving the point home, Thunder Boy proposes several profound or funny alternatives, including “Star Boy,” “Old Toys Are Awesome,” and “Drums, Drums, and More Drums” because he “love[s] powwow dancing.” In the end, his father understands his ambivalence and bestows a new name, although some readers may wish the boy, having spent several pages trying on new identities, had come up with it himself. Regardless, Alexie’s first picture book showcases his ear for dialogue and sideways sense of humor, and Morales uses voice balloons and other comics elements to complement the characters’ dynamic poses. Thunder Boy’s energy is irresistible, as is this expansive portrait of a Native American family. Ages 3–6. Author’s agent: Nancy Stauffer, Nancy Stauffer Associates. Illustrator’s agent: Charlotte Sheedy, Charlotte Sheedy Literary Agency. (May)
close
Details