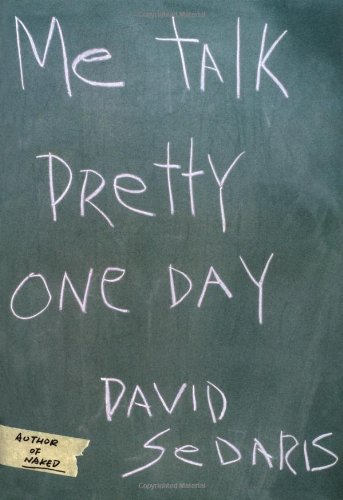 Me Talk Pretty One Day

Sedaris is Garrison Keillor's evil twin: like the Minnesota humorist, Sedaris (Naked) focuses on the icy patches that mar life's sidewalk, though the ice in his work is much more slippery and the falls much more spectacularly funny than in Keillor's. Many of the 27 short essays collected here (which appeared originally in the New Yorker, Esquire and elsewhere) deal with his father, Lou, to whom the book is dedicated. Lou is a micromanager who tries to get his uninterested children to form a jazz combo and, when that fails, insists on boosting David's career as a performance artist by heckling him from the audience. Sedaris suggests that his father's punishment for being overly involved in his kids' artistic lives is David's brother Paul, otherwise known as ""The Rooster,"" a half-literate miscreant whose language is outrageously profane. Sedaris also writes here about the time he spent in France and the difficulty of learning another language. After several extended stays in a little Norman village and in Paris, Sedaris had progressed, he observes, ""from speaking like an evil baby to speaking like a hillbilly. `Is thems the thoughts of cows?' I'd ask the butcher, pointing to the calves' brains displayed in the front window."" But in English, Sedaris is nothing if not nimble: in one essay he goes from his cat's cremation to his mother's in a way that somehow manages to remain reverent to both of the departed. ""Reliable sources"" have told Sedaris that he has ""tended to exhaust people,"" and true to form, he will exhaust readers of this new book, tooDwith helpless laughter. 16-city author tour. (June)
close
Details