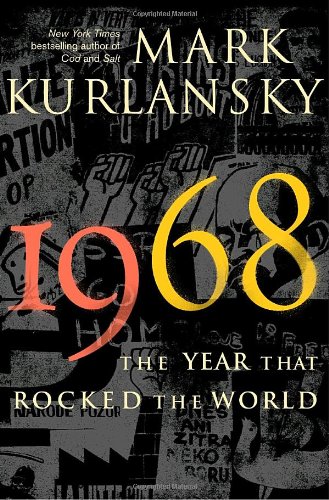 By any measure, it was a remarkable year. Mentioning the Tet offensive, the My Lai massacre, the assassinations of Martin Luther King Jr. and Robert Kennedy, the Democratic convention in Chicago, and the Prague Spring and its backlash gives only the merest impression of how eventful and transformative the year must have felt at the time. As Kurlansky ( , , etc.) has made the phrase "changed the world" a necessary component of subtitles for books about mundane objects, his choice to focus on a year that so "rocked" the world is appropriate. To read this book is to be transported to a very specific past at once more naïve and more mature than today; as Kurlansky puts it, it was a time of "shocking modernism" and "quaint innocence," a combination less contradictory than it first appears. The common genesis of demonstrations occurring in virtually every Western nation was the war in Vietnam. Without shortchanging the roles of race and age, Kurlansky shrewdly emphasizes the rise of television as a near-instantaneous (and less packaged than today) conduit of news as key to the year's unfolding. To his credit, Kurlansky does not overdo Berkeley at the expense of Paris or Warsaw or Mexico City. The gains and costs of the new ethic of mass demonstration are neatly illustrated by the U.S. presidential campaign: the young leftists helped force the effective abdication of President Lyndon Johnson—and were rewarded with "silent majority" spokesman Richard Nixon. is a thorough and loving (perhaps a bit too loving of the boomer generation) tapestry—or time capsule.