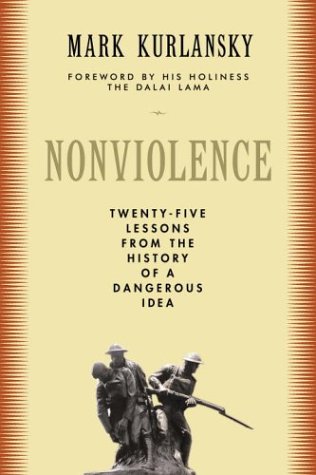 Nonviolence: Twenty-Five Lessons from the History of a Dangerous Idea

Kurlansky applies the microhistorical approach of his bestellers ( ; ) to the loftier subject of nonviolence—which, he observes, is so "profoundly dangerous" to the powers that be that it has never existed as an idea in and of itself, only as the absence of violence. "Active practitioners of nonviolence are always seen as a threat," he says, and the conflict between authority and nonviolent resistance becomes a "moral argument" that, all too often, the nonviolent lose by abandoning their ideal in the name of self-defense. But as he studies the history of nonviolence from the dawn of Christianity to the U.S. invasion of Iraq, Kurlansky can also point to prominent victories, like Gandhi's quest for Indian independence and the Eastern European resistance to the Soviets. There are plenty of missed opportunities, too; the American Revolution, he suggests, need not have escalated into war; "protest and economic sabotage" might have forced Britain to withdraw from the colonies. Sometimes, Kurlansky's impassioned rhetoric turns argumentative, and his "lessons"—e.g., "behind every war there are always a few founding lies"—offer scant practical guidance to those wanting to take up the nonviolent mantle themselves.