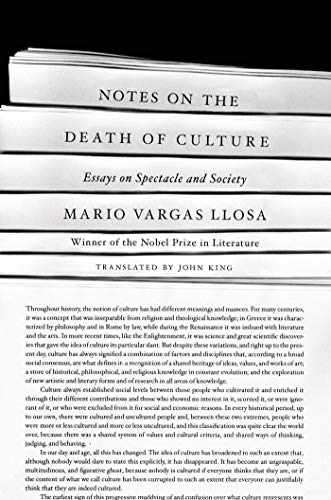 Notes on the Death of Culture: Essays on Spectacle and Society

One of the world's great literary figures, Peruvian Nobel Prize winner Vargas Llosa, now 78, offers a trenchant collection of long essays plus related articles written for El Pais, the Madrid newspaper. They approach required reading for any serious observer of arts and letters. To Vargas Llosa, the contemporary beau ideal is not substance or depth; the trendy and ambitious move increasingly toward inane, vulgar intellectual fashions like iron filings to magnets. "Frivolity disarms a sceptical culture," he warns. The book's first third comprises a long essay entitled "The Civilization of Spectacle," which was the original, less pessimistic title when this collection was first published in Spanish. More interested in self-promotion and exhibitionism than in substance, intellectuals "play the fashion game and become clowns." What passes for daring are in fact "masks of conformity." The author objects to a culture increasingly "pulling his leg," to a cultural establishment "complicit" in these caprices, and to a public being "manipulated and conned." Vargas Llosa fears a world hurtling toward special effects and Marshall McLuhan's "image bath." The disappearance of traditional books compounds the thrall of spectacle. Words, he reminds us in his conclusion, have the power to "delve into problems" and "tell the truth" in ways that "more enjoyable and entertaining" images cannot. An acid critique of Michel Foucault's and Jacques Derrida's confections, wherein it is "forbidden to forbid," broadens to the subsequent, abject collapse of educational authority. In "The Death of Eroticism," Vargas Llosa expresses wry amazement at the introduction of classroom masturbation workshops in sex education and the educators who think of this kind of thing as progress. In "Cold Sex," he connects such farce to the thought system of Catherine Millet, a French feminist and author of The Sexual Life of Catherine M., remarking on the "dehumanizing" results of liberated sexuality. "I end on a somewhat melancholic note," Vargas Llosa writes, for he believes the 21st-century world defines progress mainly as the satisfaction of material and power needs. Vargas Llosa has no illusions about spectacle's mass appeal and popularity, and he at once echoes and builds on earlier complaints of titans Daniel Bell (The Cultural Contradictions of Capitalism), Christopher Lasch (The Culture of Narcissism), and Neil Postman (Amusing Ourselves to Death). In this diamond-hard, prophetic complaint, Vargas Llosa reiterates many known worries and cultural omens. His alchemy results in an imposing summa that's rich in common sense and perspective. (June)
close
Details