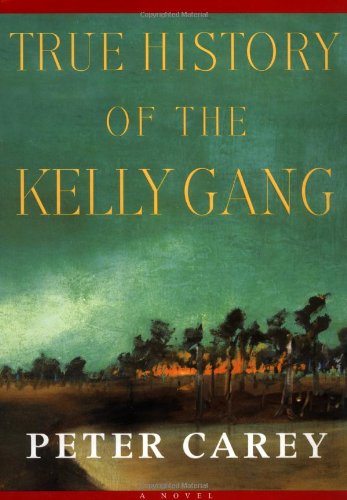 True History of the Kelly Gang

Every Australian grows up hearing the legend of outlaw Ned Kelly, whose exploits are memorialized in the old Melbourne Gaol, where he and his comrades were imprisoned before their execution in 1880. Carey's inspired ""history"" of Kelly from his destitute youth until his death at age 26 is as genuine as a diamond in the rough. No reader will be left unmoved by this dramatic tale of an instinctively good-hearted young man whose destiny, in Carey's revisionist point of view, was determined by heredity on one side and official bigotry and corruption on the other; whose criminal deeds were motivated by gallantry and desperation; and whose exploits in eluding the police for almost two years transfixed a nation and made him a popular hero. The unschooled Kelly narrates through a series of letters he writes to the baby daughter he will never see. Conveyed in run-on sentences, with sparse punctuation and quirky grammar enriched by pungent vernacular and the polite use of euphemisms for what Kelly calls ""rough expressions"" (""It were eff this and ess that""; ""It were too adjectival hot""), Kelly's voice is mesmerizing as he relates the events that earned him a reputation as a horse thief and murderer. Through Ned's laconic observations, Carey creates a textured picture of Australian society when the British ruling class despised the Irish, and both the police and the justice system were thoroughly corrupt. Harassed, slandered, provoked and jailed with impunity, the Kellys, led by indomitable, amoral matriarch Ellen, believe they have no recourse but to break the law. Ned is initially reluctant; throughout his life, his criminal activities are an attempt to win his mother's love and approval. Ellen is a monster of selfishness and treachery. She betrays her son time and again, yet he adores her with Irish sentimentality and forfeits his chance to escape the country by pledging to surrender if the authorities will release her from jail. This is in essence an adventure saga, with numerous descriptions of the wild and forbidding Australian landscape, shocking surprises, coldhearted villains who hail from the top and the bottom of the social ladder and a tender love story. Carey (Booker Prize-winner Oscar and Lucinda) deserves to be lionized in his native land for this triumphant historical recreation, and he will undoubtedly win a worldwide readership for a novel that teems with energy, suspense and the true story of a memorable protagonist. 75,000 first printing. (Jan. 16)
close
Details