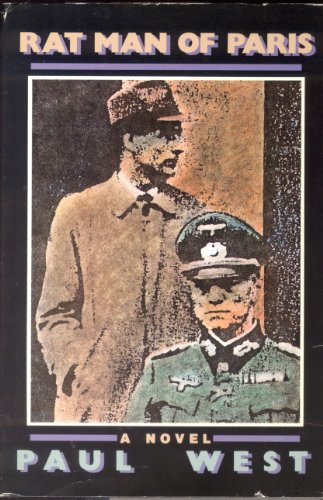 Prestidigitator, mongrel, ""holy fool,'' and boulevardier of the nether city, Rat Man flashes his rats at the crowds; people recoil, throw coins. At night in his newspaper-lined hovel, he lodges the rats in an old dollhouse of his mother's. His other treasured debris includes her fox stole. Clad in a fake rag-tag Nazi uniform, he wheels the fox in a baby cart, sporting banners printed with the face of an infamous Nazia Barbie or a Mengele. Who is Rat Man? West, with his intense interst in the possessed, the feral, the flawed psyche, and his brilliant capacity for ferreting out its secrets, discloses Rat Man's aim: to avenge a Nazi atrocity against his village. When Sharli finds Rat Man, she half-domesticates him and bears his child. Through her love she redeems his humanity. Or almost. West is a sorcerer of language: his yeasty prose seethes with metaphor that reconstructs Rat Man's warped yet canny logic. Poet, critic, essayist, novelist (Caliban's Filibuster, Alley Jaggers, he is also the author of the moving (nonfiction) Words for a Deaf Daughter, to be reissued in conjunction with this, his 10th novel. (March 7)
close
Details