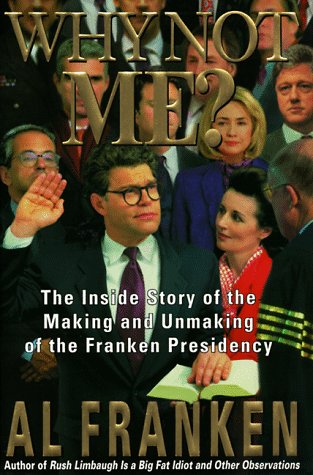 Why Not Me?: The Inside Story of the Making and the Unmaking of the Franken Presidency

For all those who want their political humor more political--and funnier--than the usual late-night TV fare, there's Al Franken. Here's the scenario: the millennial presidential campaign is nearly upon us, and Franken (Rush Limbaugh Is a Big Fat Idiot) has not merely thrown his hat in the ring--he's provided the three-ring-plus circus as well. With dead-on parodies of several forms of political media (campaign diary, strategist's memo, televised debate, Sunday morning talk show, newspaper story, magazine feature, Bob Woodward expose, etc.), this book tells the story of the improbable Franken candidacy, the humorist's more improbable success and his scandalous downfall. The pandering single issue is lower ATM fees, which allows Franken to win the Democratic primary by painting front-runner Al Gore as a tool of the banking interests. The loose-cannon campaign chief is the candidate's brother, Otto, who pops up in selected states as chief supporter ""Dotto Dranken"" or ""Botto Branken."" The effective fund-raising strategy is a 900 number for Franken info and lesbian phone sex. There's also a narrative of presidential scandal as written by Woodward, which includes chronic fatigue syndrome, bipolar episodes, misprescribed medication, an attack on the revered Nelson Mandela (Franken ruptures the great man's spleen) and an abortive attempt to assassinate Saddam Hussein--personally. This leads to the first-ever Joint Congressional Committee to Investigate the President's Mood Swings. While the book drags in a few places, it remains consistently--often howlingly--funny, as well as slyly subversive in the way it punctures the conventions of our highly ritualized campaign system. Did we mention the first all-Jewish Cabinet (including Ralph Lauren as secretary of the interior) arguing about Chinese food? First serial to George; BOMC and QPB alternates; BDD audio; author tour. (Jan.)
close
Details