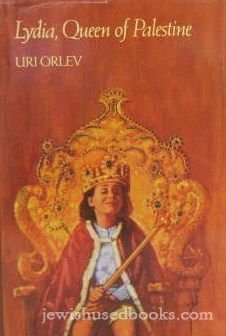 Lydia Hoffman, the vigorous narrator of Orlev's ( The Man from the Other Side ) forceful and uncannily moving novel, describes herself as a ``terror.'' Sure enough, she bulldozes her way past a series of well-meaning teachers and governesses and wreaks havoc at home, but Lydia, at 10, is not so much ill-behaved as she is passionate. Like so many children she sees daily developments (e.g., her father's growing absorption in another woman) in terms of life and death, while actual life-and-death crises loom only hazily: it's 1943, and Lydia, who lives in Romania, is Jewish. With the fascists' sudden rise to power, her father, a journalist, flees to Palestine, where he sends for ``That Woman'' instead of his own family. Her resourceful mother arranges Lydia's official transport to Palestine (and a perilous route for herself), but, however safe, the kibbutz at the end of the journey provides no refuge from Lydia's inner conflicts and sense of loss. Orlev portrays his turbulent heroine with the greatest respect, introducing her as a figure whose choices are not equal to her needs but who nonetheless refuses defeat. The author's judicious invocation of historical events and his energetic emphasis on the characters' personal dramas build to a riveting story in which every element seems freshly lived. Ages 10-14. (Oct.)
close
Details