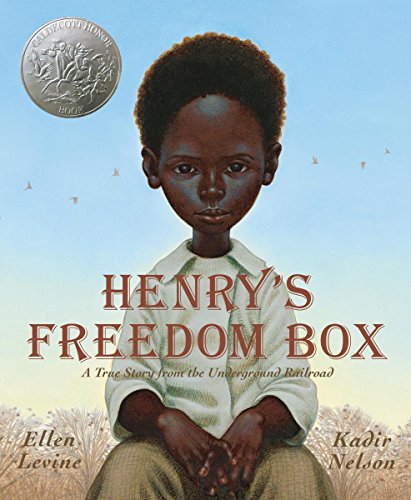 Levine ( ) recounts the true story of Henry Brown, a slave who mailed himself to freedom. Thanks to Nelson's ( ) penetrating portraits, readers will feel as if they can experience Henry's thoughts and feelings as he matures through unthinkable adversity. As a boy, separated from his mother, he goes to work in his new master's tobacco factory and eventually meets and marries another slave, with whom he has three children. In a heartwrenching scene depicted in a dramatically shaded pencil, watercolor and oil illustration, Henry watches as his family—suddenly sold in the slave market—disappears down the road. Henry then enlists the help of an abolitionist doctor and mails himself in a wooden crate "to a place where there are no slaves!" He travels by horse-drawn cart, steamboat and train before his box is delivered to the Philadelphia address of the doctor's friends on March 30, 1849. Alongside Henry's anguished thoughts en route, Nelson's clever cutaway images reveal the man in his cramped quarters (at times upside-down). A concluding note provides answers to questions that readers may wish had been integrated into the story line, such as where did Henry begin his journey? (Richmond, Va.); how long did it take? (27 hours). Readers never learn about Henry's life as a free man—or, perhaps unavoidably, whether he was ever reunited with his family. Still, these powerful illustrations will make readers feel as if they have gained insight into a resourceful man and his extraordinary story. Ages 4-8.